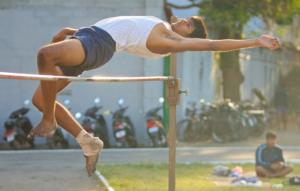 I grew up in an environment which gave a lot of emphasis to physical education. The school in I studied, The Sri Aurobindo International Centre for Education, made sports compulsory for two hours every day, for seven days a week.

Since the age of three sports forms an integral part of a child’s routine. Every evening 4:30 to 6 pm is the time set aside for physical education; and as the child grows the hours increase correspondingly. Children from a young age are introduced to a wide range of sporting activities – swimming, gymnastics, athletics, football, basketball, softball, cricket, volleyball to name a few. Self defense is considered very important and children learn various forms of martial arts – judo, wresting, boxing and lathi.

Now when I look back what I find really amazing is that there was never any distinction made between girls and boys. The girls faced the same hardships with no concessions made. I didn’t know it then but a strong body able to endure challenges made the mind strong as well. The ability to push one’s body just that little bit and feeling of elation at having achieved one’s goal is a feeling that cannot be described but has to be experienced!
I was a sprinter. It came to me naturally without really having to work that hard at it. At age 15 I remember challenging myself – inspired as I was in those days by tennis players like Steffi Graff – to push myself just that little to see the results. I used to run the 100 metres with ease at 15 seconds. I was the fastest girl in my batch and I have become complacent. We used to have competition seasons four months in a year where we’d spend training for gymnastics, athletics, swimming etc. It was a month dedicated to particular sport. We had a one month to work on ourselves until the competition began. One particular year I made up my mind to run the 100 metres in under 15 seconds – a feat I hadn’t accomplished to far. So, I practiced and for over three weeks built up stamina and ran the 100 metres in 14.5 seconds which the fastest I have ever been!
That sweet feeling of accomplishment of watching your name going up in the school book of records is something I will never forget.
Sports have a way of making you conquer fear. I was always petrified of heights as a child and used to dread diving during the swimming season. What terrified me particularly was the five metre diving board. All sporting activities were compulsory and there was no escaping this one either. I remember a bunch of us standing by the five metre diving board frozen to the spot unable to take the dive and feeling the cold breeze on our backs. There were times when we’d stand there for over an hour until we had mustered courage to take the leap. We managed it eventually. I still remember that feeling of elation and relief when I hit water!

It may sound like it was really tough but in hindsight the emphasis on sports is something I would never exchange for anything else. It not only made my body strong and agile but gave me an emotional and mental fitness which is essential in a well -rounded education system.