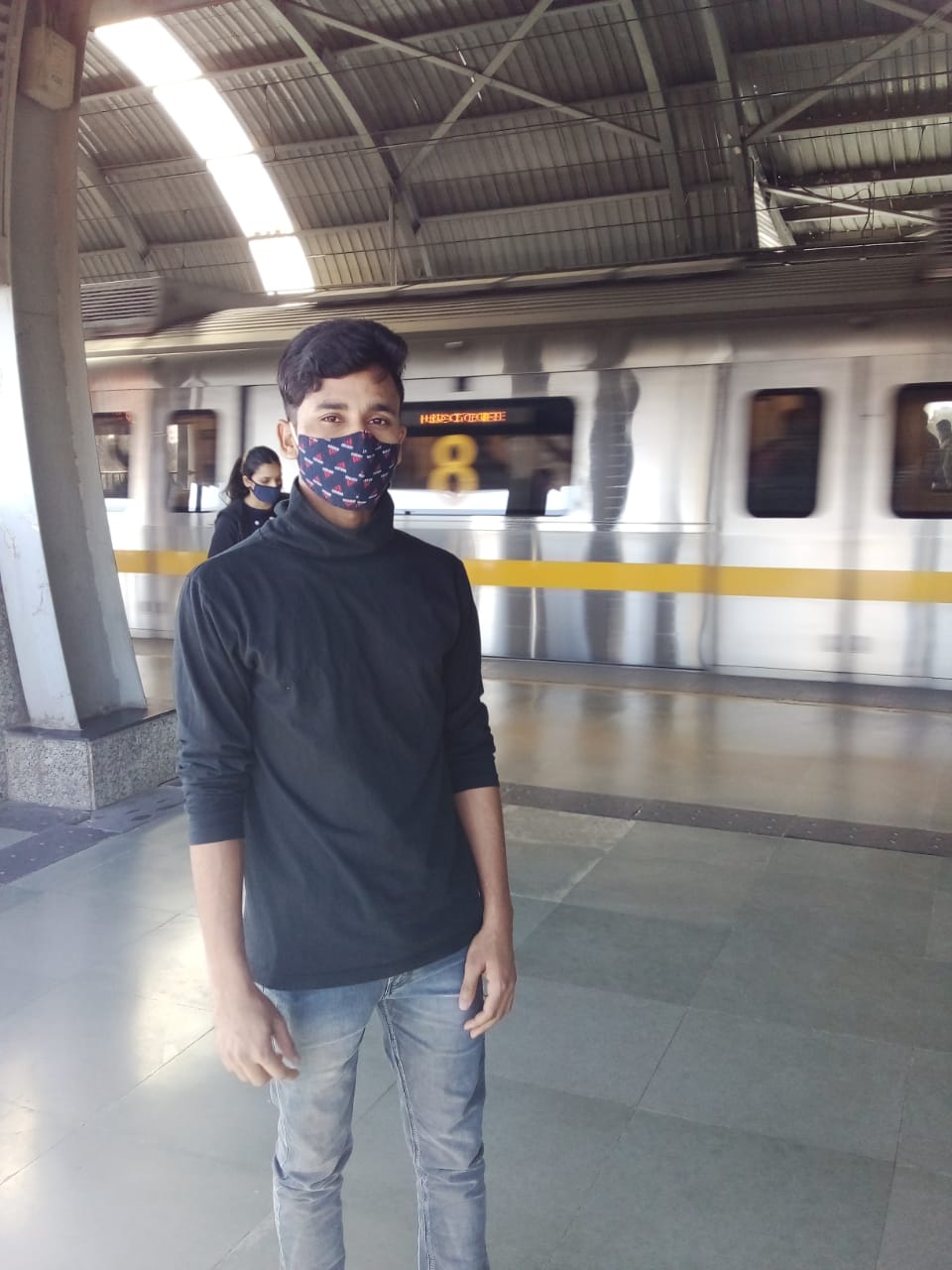 Sushil Kumar belongs to a remote village of Basti district of Uttar Pradesh. The family of 10 members owns a small piece of land. His father lost one hand while he was working in a factory. Therefore his elder brother has to earn money as a daily wage labourer.
Sushil passed class 12 in which he took Hindi, English, Mathematics and Science. Sushil came to learn about Ritinjali’s Second Chance School from a student who helped in learning Science subjects in his village. After going through the background of the family and their poor financial status and, more importantly Sushil’s interest in continuing education, Ritinjali enrolled him in Second Chance School in October 2020.
Before enrolment Ritinjali ensured his family members of providing a safe environment keeping in mind the first onslaught of pandemic though it was waning then.
At the outset Sushil was found to be lacking in confidence. Though he was very curious to continue his education, he was not sure as to whether he would be able to compete with the metropolitan environment of Delhi and also what kind of peers he would come across.
In order to provide a safe environment and quarantine facility in Second Chance School in Delhi, continuously he had to attend all classes in upgraded virtual classroom from October 2020. He learnt Life Skills, Work and Life Readiness Programme, Expressive Arts, English Communication from Inlingua; Computer literacy from Aptech Computers and Five Areas of Development. Also his Individual Education Plan included admission into graduation through IGNOU (Distance Learning).
He took part in the distribution of blankets by Ritinjali to those destined to pass chilling winter nights in the open and to old age shelter home in January 2021. While traveling to shelter homes for blanket distribution he expressed that seeing the multi storey buildings of Gurgaon was one of the most exciting moments of his life. He asked several questions and expressed a desire to work in an office of such multi stored buildings.
It was a memorable moment for one with his background to be to dream of getting a respectable job with so much enthusiasm. Sushil’s sustenance was totally dependent upon the unconfirmed daily earnings of his elder brother as a labourer. During one of the sessions he admitted how he and his family members had passed many nights when there was nothing to eat and he said he knows how restless it is to pass time without food. Now he can dream of a respectable job through his avid sincerity and ensured support.
After the completion of 6-monthly personality development course, Sushil was enrolled in Coding and Data Sciences Course from TGC, South Extension, New Delhi, which was based on his learning of mathematics in class 12th and his interest in the field as well as assessment of the data scientist as to whether he would be able to compete in this field. Though owing to the imposition of curfew in Delhi because of the sudden outbreak of the pandemic the institute had to discontinue the offline session. Sushil has been found to be regular in attending online coding and data sciences classes from home.
Sushil likes dancing and aerobics which have contributed to his self-confidence. We look forward to his completion of the course as well as getting him job placements.

Rajesh joined Ritinjali’s Second Chance School on 29th July 2018. He belonged to a poor family of Katihar district of Bihar. His father has a small piece of land for farming which fetches a meagre amount of crop for family sustenance. His father additionally works under a health professional in his village.
After so much struggle to earn money at the age of 19 as an unskilled worker in different sectors, Rajesh found a ray of hope when he learnt about Second Chance School support for the boys of economically poor background in continuing education and providing appropriate vocational skills for a respectable job.
He is obliged to his parents for their moral support to allow enrolment into Second Chance School which would cater to his educational needs.
After joining Ritinjali’s Second Chance School, Rajesh was enrolled in the PIAIP programme where he learnt Work and Life Readiness programme, Life Skills, English Communications etc. He was also enrolled in Certificate of Computer Application course from NIOS as a residential component. Rajesh also underwent theatre programme in which he was a part of theatrical activities which contributed to his personality development a lot.
After the completion of six- month PIAIP programme, Rajesh was enrolled into a professional course based on his interest and skills. Since he had completed class 12 with science subjects and he was found to be greatly inclined towards nursing and medical profession, he was enrolled in Operation Theatre Assistant course from Vivo Health Care in February 2019.
While keeping track of his efforts and performance at the institute where he was learning Operation Theatre assistant course, we found him to be among the best with respect to his attendance, punctuality, enthusiasm which translated into getting good percentage of marks in theory and practical.
After that he got an opportunity to work in Columbia Asia Hospital as an Operation Theatre Assistant as an intern from November 2019 onwards. During the Pandemic and Lockdown in 2020, Rajesh had to go home in April 2020 although by then he had completed his internship in the hospital. As per Rajesh he learnt a lot during the internship.
Rajesh returned from home to Delhi and faced interview for the job. He succeeded in getting job as an Operation Theatre assistant in KK Health Care, Multi-Speciality Hospital of Gurgaon in January 2021. Rajesh is earning a respectable salary but his appetite of learning seems to be never ending. He shared that here he was also given the opportunity to assist in the radiology department in view of his request to get him engaged after the completion of OT job.
A boy who performed several kinds of unskilled job responsibilities from a courier boy to construction worker till July 2018 has found himself in full contentment donning PPE Kits assisting doctors of renowned Hospitals of Delhi NCR. Rajesh is getting Rs. 10,000 per month here.
During his stay at SCS Hostel Rajesh was found to be a boy with good demeanour, vocal and target oriented. It goes without saying that in yet another Ritinjali’s successful transformational endeavour, his sincerity towards performing allocated responsibilities contributed magnificently towards his success.