Views from the Philosophers’ Retreat 2019 By Choki Wangchuk 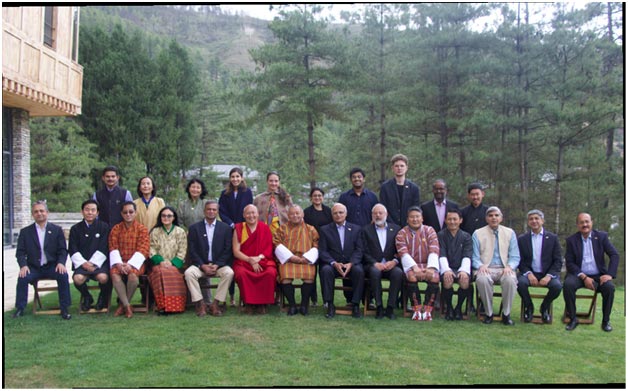 The panel discussions that took place on June 14 and June 15, 2019 as part of the second Philosophers’ Retreat focused on the theme, ‘Inculcating Resilience in Youth’. The topic was a follow-up to the 2018 retreat that centered around the ‘Purpose of Education’ and its role in preparing our youth for the ever-changing world. It was noted that resilience is one of the main traits to help the youth deal with the various challenges of life and the inevitability of change.

Resilience was described as the ability of a person to balance toughness and tranquility as she navigates life’s challenges and opportunities. Resilience enables a person to maintain strength and equanimity throughout life’s inevitable turbulence, with an internal stability and perspective which allows her to stay true to her continuous pursuit of personal ideals. It was recognised that resilience manifests in myriad ways depending on the person and the particular situation but in all cases, it enables a person to do the needful in order to continue moving toward her goals: if a situation requires mundane work, she will draw upon patience; if a situation requires extreme effort, she will muster strength; and if she is knocked down by an oppositional force, she will pick herselfup, often bouncing back stronger.

There was a discussion on the Buddhist perspective on the inevitability of adversities: it was noted that even the luckiest of us deal with sickness, aging and death. Many of the panelists shared deeply challenging experiences, such as loss of loved ones, poverty, war, natural calamities and loss of meaning in life. Others shared examples of life’s mundane realities, which demand sustained energy and motivation for long periods of time. Reflecting on all of the situations, panelists agreed that the education system is not the only social structure which must be engaged to inculcate resilience in youth: families, organizations and communities must also support the development of this quality. It was also unequivocally agreed upon that the infusion of technology in all aspects of life is causing unprecedented rates of change and increasing unpredictability in our lives, thus making resilience an indispensable trait for rising generations.

The panelists noted that resilience is a well-researched topic and there is a lot of literature on it. Based on the existing resources, it was concluded that resilience can indeed be inculcated as opposed to a fixed biological trait in humans. The resources cited included the ABCDE (Acceptance, Belief, Commitment, Discovery, Evaluation) strategy, concepts of Tragic Optimism and Positive Psychology, and various lesson plans used for inculcating resilience. Popular literature included Grit: The Power of Passion and Perseverance and Drive: The Surprising Truth About What Motivates Us. The first book makes a point that perseverance and determination are key to overcoming challenges, while the second one discusses how autonomy, self-mastery and purpose are key sources of intrinsic motivation that is necessary to thrive. Other resources and concepts discussed were the Philosophy of Stoicism, Self-Determination Theory and Emotional Intelligence.

One of the salient points of the discussion was the wealth of Eastern tradition and wisdom that speaks to the notion of resilience. The non-sectarian teachings of Buddha say that mind matters most. The idea of ‘mind over matter’ shows the importance of knowing oneself and developing mindfulness and self-mastery to bounce back from any situation. Reflection and mindfulness can play a central role in a person developing resilience. This wisdom has been adopted to develop the ‘Thought Model’ by viewing the idea of thought at a granular level. Our thoughts and reactions to circumstances lead to feelings, which in turn result in actions and consequences. We may not be in a position to control circumstances but we can choose what kind of thoughts we want to harbour, which will lead to the corresponding feelings, actions and consequences. The ability to apply the Thought Model skillfully can result in resilience.

The various themes on resilience that were discussed are listed below. The details have been nuanced and presented in a larger report.

‘Be your personal best’: Perhaps one of the most important ways to inculcate resilience in our youth is to guide them to the understanding that they need to recognize their own potential and strive to be their personal best. Do they compare themselves to others or simply focus on bettering themselves when asked to assess their success? The answer generally plays a huge part in gauging if a person is resilient.

Character-building: Inculcating certain values and traits from a young age can make a person more resilient. Integrity, responsibility, justice and compassion are examples of such important traits. Attitude and perspectives go a long in determining not only how an individual deals with failure but also with success.

Role of parents, teachers and society: The role of home, school and environment in inculcating resilient in youth cannot be emphasized enough. They play an essential role in helping the youth develop self-esteem and a sense of belonging. It is important that parents, teachers and society allow children to be who they are while helping them become resilient. The pressures and expectations they put on the youth have an undeniable impact, especially with regard to resilience.

Types of resilience: Cognitive resilience is important but it is equally significant that a child is resilient physically, socially, spiritually and emotionally. Intellectual rationalization will fall short if there is a lack of recognition for emotional, social and spiritual hygiene. For example, a youth may understand the difference between positive and negative thoughts but it will require emotional grit for her to deal with negative thoughts in an effective manner.

Technology and Social Media: Technology has accelerated the pace of change due to which adaptability becomes a key trait to become resilient in today’s world. Social media in all its varying facets have added new challenges to how people view success, failure and themselves.

Individual and Community Level: In addition to inculcating resilience in individuals, we need to think about systems and processes to make our communities more resilient.

Dispositional v/s Situational: There was a discussion about whether resilience is dispositional or situational. It was agreed upon that resilience needs to be both. We need to inculcate resilience as a part of our overall character and outlook but we also need the ability to discern when and where it is needed. This requires developing the capability to take calculated risks and accept failure as a part of the journey. This also requires making tough decisions regarding what is worth fighting for and when it is time to let go. That is why, traits such as ‘courage’ and ‘sacrifice’ are central to the idea of resilience. Also, in most cases, resilience is not exhibited at a particular moment but over a period of time. The idea of closure can be crucial in these situations where resilience is a drawn-out journey.

Curriculum: How to incorporate resilience as a part of the school curriculum was a crucial theme. The participants agreed that developing a separate curriculum on resilience to be taught in silo would be defeating. Instead, the approach should be  integrated where the notion of resilience is conveyed through sports, arts and domain subjects. One of the best ways to introduce, explain and showcase resilience is through stories, be it personal accounts or well-known folktales.

In Awe of life: A truly resilient youth or person would not choose to give up on life, no matter how hard circumstances get. One of the ways to ensure this is to inculcate the appreciation and awe of life at a young age. The idea of hope, inspiration and aspiration can be a constant source for resilience for many. Reflection, compassion and gratitude also go a long way in inculcating resilience.

The panelists agreed that adversities and mundaneness are a part of life. There are numerous times in everybody’s lives when moving ahead seems hard. Anyone can simply give up because that is the easiest thing to do. But to hold it together when everyone else would understand if you fell apart, that is true strength. That is resilience.