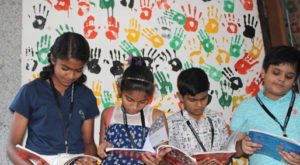 I grew up in a French medium school. While in kindergarten I learnt to speak French and Sanskrit for the first three years. It was a difficult time for my parents who spoke neither French nor Sanskrit and we had to rely on my mother tongue – which in my case was Hindi – in order for us to communicate. So, by the age of five I was speaking, thinking and dreaming in French and Sanskrit! English and Hindi were introduced at age nine by which time I was fluent in French and it took me a while to get the hang of things.

French still remained the medium of instruction – Science, Math, Biology, History were all taught in French. And a lot of importance was given to the French language itself. There was a lot of emphasis on the complicated grammar and during later years an in depth understanding of French literature. During later years, as I was an Arts student, I was given an option of learning either Spanish, Italian or German. I remember thinking at the time what an exciting prospect this was! I chose Italian simply because I had just been to Italy and was in love with the country, its people, the food and its history! Italian is easy to pick up once you know French and this lively Italian teacher from Naples who made the process fun!

Having been exposed to several languages throughout my life I believe that it certainly opens a child’s world. Not only does one learn a language but one learns about a country’s culture and traditions. It broadens a child’s view of life bringing them closer to different races and nationalities. In a world that is constantly changing, communication is becoming increasingly important. Children who are able to communicate with a variety of cultures are the ones that will have more advantages in life.

Studies show that a multi-lingual education can strengthen the executive function of the brain. In fact, research shows that because bilingual students are able to use two languages at the same time, switching consistently, it develops skills for functions such as inhibition, switching attention, and working memory. Students who are exposed to several languages, often perform better on tasks which require multi-tasking, decision making and problem solving, even though they have nothing to do with the language. And of course knowing more languages can give a student so many more opportunities when looking to study further.

Furthermore, knowing several languages can make a candidate stand out among prospective employers. It also open doors to extra opportunities that those without these skills may miss out on. In today’s growing global economy, many international companies are increasingly searching for employees who are multi-lingual.

The crux is that learning a language is not enough. Children must be encouraged to read and practice to speak the language in a consistent manner. If not, one may have a talent for languages but if not used it dies out. The best way is immersion in the language and culture. Student exchange programs, or interning in foreign countries will force students to test their skills and master the language.
In short, you have to leave it and breathe it in order to master any language.