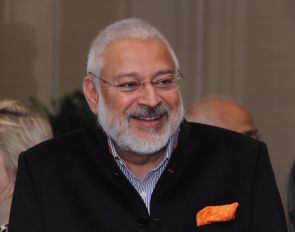 Arun Kapur is an educator with several decades of experience in the private as well as public education spheres. After graduating from St Stephen’s College, he worked as a
teacher and Housemaster for more than a decade in the Doon School. In 1990, Arun Kapur became the founding Headmaster of Vasant Valley School. He nurtured the school to become India’s leading co-educational day school. Since 2008, he has been working with the Royal Academy in Bhutan, a project of His Majesty, the King of Bhutan. Arun Kapur is currently the Director of the school. He also serves on the Boards of many prestigious schools including the Doon School, Scindia School, and Pallavan School.

Arun Kapur is the founder and Chairman of Ritinjali, an NGO, set up in 1995 for community development among marginalized societies in India. In 2001, he conceptualized and started a chain of Pre-Schools named Pallavan and thereafter set up Pallavanjali, for the inclusive
education of diverse learners. In 2008, he set up Pallavan School in Jhalawar, Rajasthan. He is also the Executive Director of Pallavan Learning Systems, an educational research organization. Powered by Pallavan Learning Systems (PLS), Arun Kapur conceived and developed Paradise Valley Private School under the supervision of the Ministry of Education in Oman. He is also the chairman of Centre for Escalation of Peace (CEP) that creates platforms and programmes to encourage the free exchange of ideas across borders.

Transforming Schools – Empowering Children and Leading Out – The True Purpose of Education are his two books that focus on his educational philosophy of (w)holistic development in five areas (Cerebral, Emotional, Physical, Social and Spiritual) and self-directed learning being the ideal basis of education for actualizing one’s potential.

Arun Kapur has contributed to multiple forums on education. The Five Areas of Development curriculum conceptualized by him has been recognized as one of the 100 most inspiring global educational innovations in 2017, and 2018 and 2019 by HundrED, Finland. He has worked with all age groups and all sections of society. Widely read and widely travelled, Arun Kapur’s understanding of children and their needs, the innovations he has introduced, and his belief that education is the best route to self-actualization, have added immense value to the various projects he is associated with.

In December 2019, Arun Kapur was awarded the Druk Thuksey Award, the Royal Order of Bhutan, by His Majesty Jigme Khesar Namgyel Wangchuk for his contribution towards education.